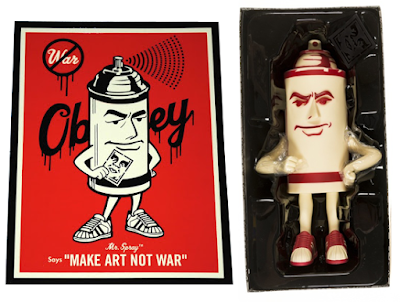 Street Stickers, or as I prefer to call them Designer Stickers, are the other side of the Indie Artist coin. These inexpensive mini silk-screened prints cost a mere $0.08-$0.17 cents each and have a global reach and public presence Designer Toys will never have. Seriously how often have you seen Designer Toy glued to a wall or stuck to a light post?

My company Discordia Merchandising can get anyone an assortment of designs for pennies a piece and we do so for dozens of artists annually going back over a decade. But from our experience we see very little cross over between the Designer Sticker and Designer Toy world.

There are a few exceptions, MCA comes to mind, as his toy design was featured on the cover of the last issue of PEEL Magazine back in 2007. An issue that tellingly hinted at a cross over between these two art worlds as it also featured ads by Rotofugi, and an article on Graffiti legend SEEN featuring some Art Toys of his design, called Spray Monsters. There is also a feature on early Dreamland Toyworks productions which brought street artist Olive47 to toy from with the Miss Cupcake Platform.

"Well not everyone is OBEY!" someone will inevitably exclaim. And yes this is true, very few street artists will gain that caliber of exposure and get offers from toy companies to produce their wares. But, stickers are how Shepard Fairey got to where he is now, so imagine the kind of reach Toy peeps could obtain if they did apply themselves to Street Stickers instead of acting like they are too good for such trivial pursuits and focus solely on the Gallery Scene aspect of the Art world.

Take my own side project Psychological Industries. Which admittedly hasn't seen a toy production yet, mostly because I have personally invested more in development of DIY Toy Platforms for other artists to work on and project themselves into the Custom Toy Scene, instead of keeping my toy productions self-centered. (Ahem, Toy Companies, I'm still waiting...)

Psychological Industries, with just Street Stickers, has, at my best estimate, launched 60,000 vinyl stickers since 2005. Through Sticker Trades it has spread around the globe and can bee seen in major city streets world-wide, including a University Archive based on Street Stickers as a Social Justice Movement going back at least 100 years. This is aside from the 30 plus Gallery Shows Psychological Industries has been seen at. How many Toy Artists can say that about their work?

The allure of Designer Stickers can be witnessed at work in a Toy Artists career through the Suckadelic Stoopid Stickers project I ran for The Super Sucklord this year. But launching a Pre-Order Event on Kickstarter the 200 sticker packs I was willing to print up and package for the 'Bootleg Toy' Scene originator, became a high demand project and we ended up making 600 sticker packs instead! The fan base demanded much more than we could anticipate, and that is the beauty of Kickstarter. It is the PreOrder Platform that lets fans tell you what your reach SHOULD be, VS what you think it is.

Sucklord has been on the scene for quite a while and yet has not gotten the Street Sticker boost he should have and desires deeply. So I'm glad to help him put a dent in this dilemma by supplying the demand and putting a ton of street stickers in his greedy hands without applying any effort on his part.

I personally buy up all the Designer Stickers I can from toy artists, again, this is very few and the selection is also very thin in each artists online shop. So I strongly encourage Toy Artists to get their sticker game on and make the moves to get into the streets planet wide.

"How does one break into this scene?" you may ask. Well outside of locating and testing out silk-screened sticker printers, anyone can get in touch with Discordia Merchandising and get access to this niche art world in a snap. I print stickers, package stickers, sell sticker packs through Discordia Culture Shop, and even run a Sticker Drop.

This is a service whereby anyone can mail in, or have me print up, any volume of stickers. The Discordia Sticker Drop then sends back a small selection of stickers from all participants to anyone who sends in. But it doesn't stop there. The Discordia Sticker Drop also mails out assortments of stickers to various Sticker Art Shows globally, and throws free stickers into every order from Discordia Culture Shop, and our 'sister stores' Populous Ephemera and Planet Eris. Which amounts to dozens if not hundreds of orders each month for the last 12 years.

Another way anyone can jump into the Street Sticker Scene is by taking part in the Bootleg Posse Project. Pick up the Template from the PEEL Magazine site and email it in to get into the running to be included in the PEEL Has A Posse Special Issue already Unlocked in the Kickstarter PreOrder Event! 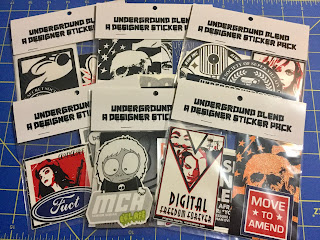 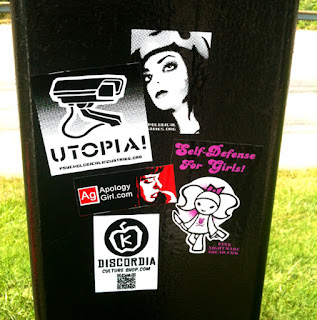 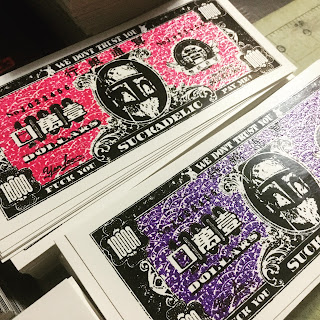 Don't miss this monumental project from Discordia Merchandising / Discordia Publishing. Now a Project We Love on Kickstarter. With ton... 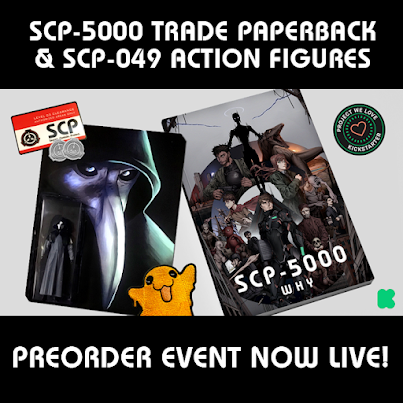 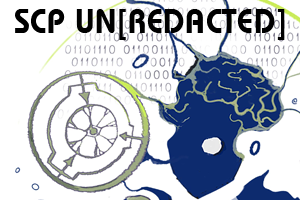